Get the Prescription Pulse Newsletter

Presented by the Coalition for Affordable Prescription Drugs (CAPD)

With help from Allie Bice

PROGRAMMING NOTE: The Prescription Pulse Newsletter will not be published from Monday Aug. 26-Monday Sept. 2. We'll be back on our normal schedule on Tuesday Sept. 3.

— Polling shows 'overwhelming' backing for Medicare negotiation and even more controversial moves like marching in on patents.

— Drug shortages loom in a no-deal Brexit according to a grim leaked report.

A message from the Coalition for Affordable Prescription Drugs (CAPD):

Don’t be fooled by Big Pharma: their prices are the problem. Big Pharma alone sets the price for their drugs and continues to raise those prices as often as they can — all at the expense of patients. Learn more.

Happy Tuesday and welcome back to Prescription PULSE, mid- to late-summer edition. Your POLITICO Pro pharma editor Arthur Allen fiddling at the controls here, with help from Sarah Owermohle who is just in from the wilds of Maine. Sarah Karlin-Smith is expected back from leave on Wednesday!

FALSE CLAIMS SUITS POSE NEW PATENT CHALLENGE PATHWAY — An argument heard in San Francisco Federal District Court earlier this month — and teed up in a similar case in October — could open a new door for generic drugmakers to challenge brand-name manufacturers’ patents. First, patent lawyers have filed a false claims suit over Apriso, an ulcerative colitis medicine that Valeant (now Bausch) launched in the early 1990s but has no generic rivals. They’re also targeting Allergan’s Namenda XR, a dementia medicine it reformulated as an extended release drug several years ago to stave off competition (and had a similar case over Johnson & Johnson's prostate cancer medicine Zytiga earlier this year.)

To win, the challengers, representing the U.S. government, 27 states and the District of Columbia, need to show that a key patent extending the drugs’ exclusivity isn’t for anything actually innovative. With Apriso, they’re pretty sure they have a solid case: Valeant tried six times to win a new patent on the medicine but only secured one in 2008 when it added two words: [that patients could take it] “without food.” The patent lawyers have argued that the company knew it didn’t have a real innovation years before that but continued to push its case.

What’s new: The case is the first of its kind since Congress used the ACA to open an opportunity for new suits via the False Claims Act in 2010. “If it’s validated by the courts, it may change the entire industry,” patent attorney Nicomedes Sy Herrera, leading the Apriso case, told Prescription PULSE.

…That said, the potential legal pathway could only be used against one patent at a time. The dozens of patents stacked up around blockbuster drugs — patent thicketing, as its known — wouldn’t really be susceptible to this kind of action.

Still, it could be big: The legal theory is that when drug companies extend their monopolies through fraud or misrepresentation to the Patent Office, the high prices the government has been paying for the protected drugs entitle it to recover three times what it was charged. A win on the Apriso case alone could translate to more than $10 billion in damages and fines, Herrera said.

ANALYST: MYLAN-PFIZER MERGER MAY NOT BE THE LAST OF ITS TYPE — Mylan's recently announced plan to combine with Pfizer's generic drug business, Upjohn, illustrates a trend of generic drug manufacturers shifting toward biosimilars or other complex drugs, Fitch Ratings says in its latest report. Fitch says Mylan's merger was “defensive,” given that its generic product prices are declining modestly while it faces price fixing and opioid litigation and congressional inquiries. Thanks to cheap financing, more mergers of this type are likely to continue, the report says. 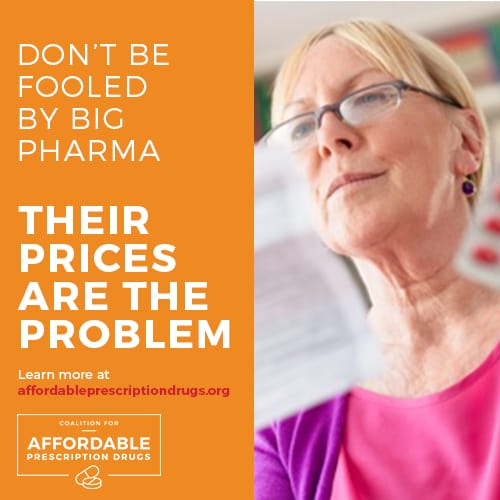 PROGRESSIVE GROUP’S POLL SHOWS BIG SUPPORT FOR PRICE NEGOTIATION — More than 84 percent of respondents in a labor and health coalition’s polling support allowing Medicare to negotiate lower drug prices with pharmaceutical companies — a key policy point for progressive Democrats but a non-starter for most Republicans.

Lower Drug Prices Now — a coalition that includes Public Citizen, Families USA, Social Security Works, Health Care for America Now, the American Federation of State, Country, Municipal Employees and the AFL-CIO —released the poll to kick off events in 32 states in favor of Medicare negotiations and other reforms. Less than five percent of the more than 1,000 respondents — the pollster says the chosen to represent a typical swathe of voters — opposed negotiations, while the remainder had no opinion. An amendment for negotiations in Congress, meanwhile, was shot down in the Senate Finance committee last month.

…and march in on generics. Meanwhile, two thirds of those polled supported strongly or somewhat allowing other manufacturers to produce generic versions of drugs that the government decides are too expensive. These so-called “march-in rights” were discussed in a testy House Oversight panel discussion of Gilead’s prices for HIV prevention drug Truvada. Republicans say the practice would kill incentives to innovate.

A NEW ANTIBIOTIC — The FDA on Monday approved the drug to treat some of the 1 million people in the United States who are hospitalized with community-acquired bacterial pneumonia each year. In two trials Xenleta or lefamulin, made by Nabriva Therapeutics, was as successful in treating pneumonia as moxifloxacin, alone or in combination with linezolid. FDA’s label says pregnant women and certain heart patients should avoid the drug. It’s part of a class of drugs developed in the 1950s, originally from a tree fungus, and used in veterinary medicine. FDA has tried to encourage the development of new antibiotics to deal with the threat of antimicrobial resistance.

DIVERSITY STILL LACKING IN CANCER TRIALS— Cancer researchers are still failing to recruit people of diverse ethnicity and race to their clinical trials, according to a new JAMA Oncology study. Of the 230 clinical trials for drugs that were approved by the FDA from 2008 to 2018, only 18 divided the data by racial groups, and those that did showed they had had trouble recruiting representative samples of minorities. White patients accounted for an average of 76 percent of the participants; Asians represented 18 percent, while Hispanics accounted for 6 percent and blacks just 3 percent of the cancer trial participants.

BREXIT COULD LEAD TO DRUG SHORTAGES — British industry is reeling from a leaked report that a “no-deal Brexit” would bring about a shortage of drugs as well as fresh produce. According to leaked U.K. Cabinet Office documents published by The Sunday Times, 85 percent of trucks transporting essential medicines may not be ready for French customs in time for the current October 31 deadline for a deal. About three-quarters of all drugs coming into the U.K. pass through a particular crossing in France. “We told you this would be the worst case scenario if nothing was done and very little has been done up to this point,” Rod Mckenzie from the Road Haulage Association said Monday. Meanwhile, the European Commission is letting London stew over the implications of Prime Minister Boris Johnson’s promise the country will quit the EU by October 31, with or without a deal.

UNLIKELY BORIS TOUTING VACCINES — Amid the worst global measles epidemic in years, British Prime Minister Boris Johnson says he wants his country’s doctors to push hesitant parents to get their children vaccinated, and he’s also looking for ways to quash fake news about vaccines on social media. The U.K., where vaccination against childhood diseases is recommended but not mandatory, this week lost its measles-free status with the World Health Organization after England and Wales reported 231 cases in the first quarter of 2019. Johnson had shown disdain for scientific expertise, said James Wilson, a senior University College London lecture, “so it is hard not to see Boris as now frantically trying to beat out flames he has spent some time fanning.” Public trust in the measles-mumps-rubella (MMR) vaccine still lags in Britain despite the debunking of a 1998 paper linking it to childhood autism. Distrust of vaccines is highest among Boris’ biggest backers — people who voted for the Brexit party.

A message from the Coalition for Affordable Prescription Drugs (CAPD):

As Congress considers reforms to lower out-of-control drug prices, it’s critical to tackle the problem at its root: the high and rising prices set by Big Pharma. Drug companies set and keep drug prices high by delaying competition through patent fortresses and other gamesmanship. To effectively lower drug prices for millions of American patients, we need to stop the games and restore robust competition. Learn more.

FDA announced that the Nonprescription Drugs Advisory Committee will have a daylong meeting Sept. 18.

FDA announced it will host a public workshop Sept. 18 on implementing the agency’s predictive toxicology roadmap.

Moderna received a fast-track designation from the FDA for its experimental Zika virus vaccine.

Arthur Allen is a Health Care reporter for POLITICO Pro.

Arthur Allen became the founding member of the eHealth team at POLITICO in 2014 and recently added the pharmaceutical industry to his beat. Prior to POLITICO he was a freelancer for 18 years, writing for publications and websites such as the Washington Post, The New York Times, The New Republic, Slate.com, Landscape Architecture, Science and Mother Jones. He is the author of three non-fiction books, The Fantastic Laboratory of Dr. Weigl (WW Norton, 2014), Ripe (Counterpoint, 2010) and Vaccine: the controversial story of medicine’s greatest lifesaver (WW Norton, 2007). Allen worked for The Associated Press for the better part of 13 years, including stints in El Salvador, Mexico and Germany. He is married to Margaret Talbot and has two grown children. He likes playing pickup basketball, reading, studying languages and hunting fruitlessly for morels and other edible mushrooms.
Sarah Owermohle is a health care reporter for POLITICO Pro covering drug policy and the industry. Before joining POLITICO, she covered the business of health care for S&P Global Market Intelligence and spent five years in Dubai and Beirut reporting on business, finance and development in the Middle East and Africa, including a three-year stint as the editor of Banker Africa. She graduated from the College of William and Mary in Williamsburg, Va.